As summer progresses, flowers are everywhere – including the fashion world. After top designers began incorporating floral themes into their collections, men and women alike have been adopting the trend and making it their own. From big, bursting blooms and smaller, daintier prints to three-dimensional details, it's clear that there are many ways to incorporate flowers into clothing and accessories.

According to The New York Times, Paris men's wear collections took a surprising turn with an abundance of floral patterns for spring/summer 2014. While not typically a masculine theme, Belgian designer Dries Van Noten dressed models in pieces that offset the delicateness of blossoms with a tough, military feel for a show that the news provider called "compelling."
Pale petals were striking against a top's dark background and jackets were adorned with fern leaves. Somehow, the collection managed to be both romantic and edgy at the same time. 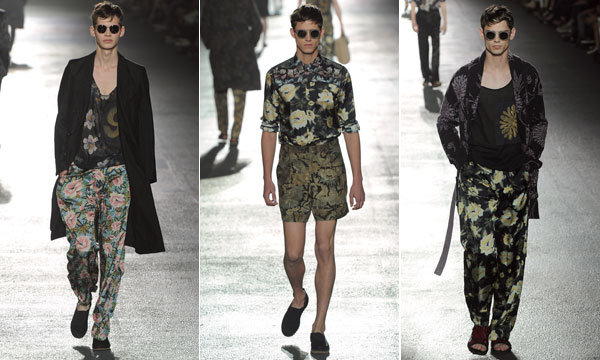 "I wanted to go back to when men wore flowers," said Mr. Van Noten, according to The New York Times. "It's challenging to see how far you can go – and stay, in my eyes, masculine."

While an unexpected theme for a men's designer, Van Noten was able to make botanicals appropriate along with militant details that called to mind pre-Industrial Revolution decorative emblems. Essentially, The New York Times explained that it was Van Noten's mission to bring blooms back, but in a modern fashion, such as with digitally scanned and printed photographs.

Van Noten is not the only drawing attention to flowers in the fashion realm. Men Style Fashion revealed that Robbie Honey, a trusted collaborator for a multitude of top designers, is known for his inspired approach to integrating blooms into a brand. Floral designer Robbie Honey has created flowers for Vivienne Westwood, Christian Dior and Valentino, among others.

"I have always been passionate about flowers and chose to make a career out of this passion when I moved to London in 1998," he told the news source. "Early on I realized the mutual relationship between the fashion world and flowers and I love this symbiosis."

He expressed excitement over the resurgence that botanical elements are making, particularly in men's style.

Communities around the country are embracing the floral fashion craze. The Chicago Tribune revealed that the Museum of Contemporary Art recently conducted its fifth annual Fleurotica fashion show, which featured designs made entirely from flowers and plants by Chicago's top floral and landscape artists. Milwaukee Magazine reported that the magnificent Villa Terrace will be hosting a biennial gala this month in partnership with Mount Mary College called "" (Flowers of High Fashion), which will showcase students' designs that were inspired by the roses, hydrangeas and other floral life of the Terrace's Renaissance Garden.

Gala Chairperson Carmen Anderson explained to the source that after she heard that Milwaukee is one of the least fashionable cities, she was determined to showcase the talent and creativity of Mt. Mary students. There will be nine different designers at the event, each of which will display a cocktail dress that is inspired by an element in the garden. The winner will go home with a $2,500 scholarship, which was donated the gardens' benefactors. A total of 65 items, including a trip to New Orleans, will be auctioned off at the gala, all to raise funds for the maintenance of the Renaissance Garden.

The vibrancy and playfulness of florals make these prints ideal for spring and summer style. As more designers take on the trend, it's becoming clear that these prints are more versatile than one would think and moreover – that this theme is here to stay. This article is brought to you by Michelle Farrell and
published by Teleflora.

Choosing the Right Bouquet for Every Room in Your House